It’s Christmas.. wait, no. It’s not even Thanksgiving. Christmas is my favorite time of year, and each year I get so excited about it really early. But this year is different. First of all, Christmas also means, for me, that I’m moving in two days. Also, we won’t be getting many presents because spending $200 on a bunch of stuff that’s going to be packed into a truck heading to the ocean! Another thing is we won’t put up many Christmas decorations or lights for the same reason. Lastly, it’ll be kind of sad. My Aunt Heidi and Uncle Mark along with their little boys, Eli and Jack will be visiting from the Middle East for Christmas and they’re leaving the same week as we are.

Today at Costco, we were looking at 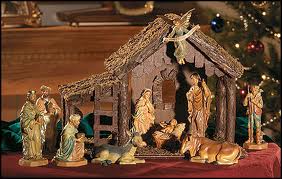 a nativity set (Costco starts early at Halloween) and seeing how many historical mistakes there were. Well, for one, almost everything there was incorrect. We have no idea how many Wise Men there were, and three is probably incorrect. Another thing wrong with them, is that they didn’t come for about three years. And the shepherds? They probably didn’t arrive until the next day. There was no mention of a donkey, there wasn’t an angel that we’re aware of, and Mary was about fourteen- not in her thirties. Oh, and for all we know, the stable was probably a cave. See what I mean? So many things that for so long we just assumed, until someone finally looked at the evidence and went, “Whoa there! Jimmy! Look at all of these mistakes!”

Another though in my head was how hectic that night most likely was. Just imagine- you’re a fourteen year old on a mule and you’re going to have a baby that’s going to change the universe who might burst any second and yet you can’t even find a place to sleep? Boy, if the person at the inn knew who was about to be born, he might have kicked somebody out. Then, after having the baby for a couple of years, you realize that somebody wants Him no longer living so now you have to move to Egypt. What a crazy life, but I think everything is worth it. Mary and Joseph amazingly don’t question a word that God has told them (did you know that there is not one word from the Bible spoken by Joseph? All of those words, and Joseph just didn’t have anything to say).

This site uses Akismet to reduce spam. Learn how your comment data is processed.